Featuring another stacked lineup, the beat showcase rolls on. On this scorched day it didn’t matter if the AC was on, because the talent was heating shit up inside with another high-powered installment of the best monthly HipHop show in Boston. This Episode featured Vinyl Villain, Evilldewer, Jenova 7, Ewonee, and emcee Rayel.

Rah Zen continues to outdo himself with his ability to bring in some of the best talent around. He could basically run a beat set of his own each week and heads would savor to see just him. He is a generous and welcoming co-host along with Kadeem. As a lyricist, Kadeem is becoming a force to reckon with in HipHop but he rocks the party as a true MC and host each time. DJ Manipulator was his usual flawless self as DJ and scratch master for the evening.

Working with all of the top emcees in the game over the last 6 months, he’s known as the Martin Scorsese of HipHop. He makes ‘music to extort businesses by.’ Vinyl Villain has built a reputation as a producer with a classic feel to his beats without being pigeon-holed into a boom bap box. He stays sharp with his sample selection and his tracks are clean and well-mixed. Known for having a ‘cinematic’ sound to his beats, they’re full of layered samples, and always well-chopped. Though his drums are adequate and crisp, Villain will also occasionally employ drumless loops. Vinyl Villain gave the crowd a good variety in the range of beats he’s capable of handling well.

Evilldewer continues to really push the boundaries of HipHop, sonically. The “Wave-form Scientician” came correct on this particular evening. The way he stretches time out, his tracks are almost off-beat, yet they stay within rhythm. He develops extremely obscure samples into masterpieces. His work is atmospheric and frequently tense. Evilldewer imposes his infectious energy on the listener. He’s headbanging and dancing the whole while, as if he’s a mad conductor on the beats. He played some joints from his Netherrealms album and a few other unknown tracks, all to the delight of the crowd. Jenova 7 and I were talking a bit about how unique Evilldewer truly is. We both agreed he is the epitome of an idiosyncratic artist. 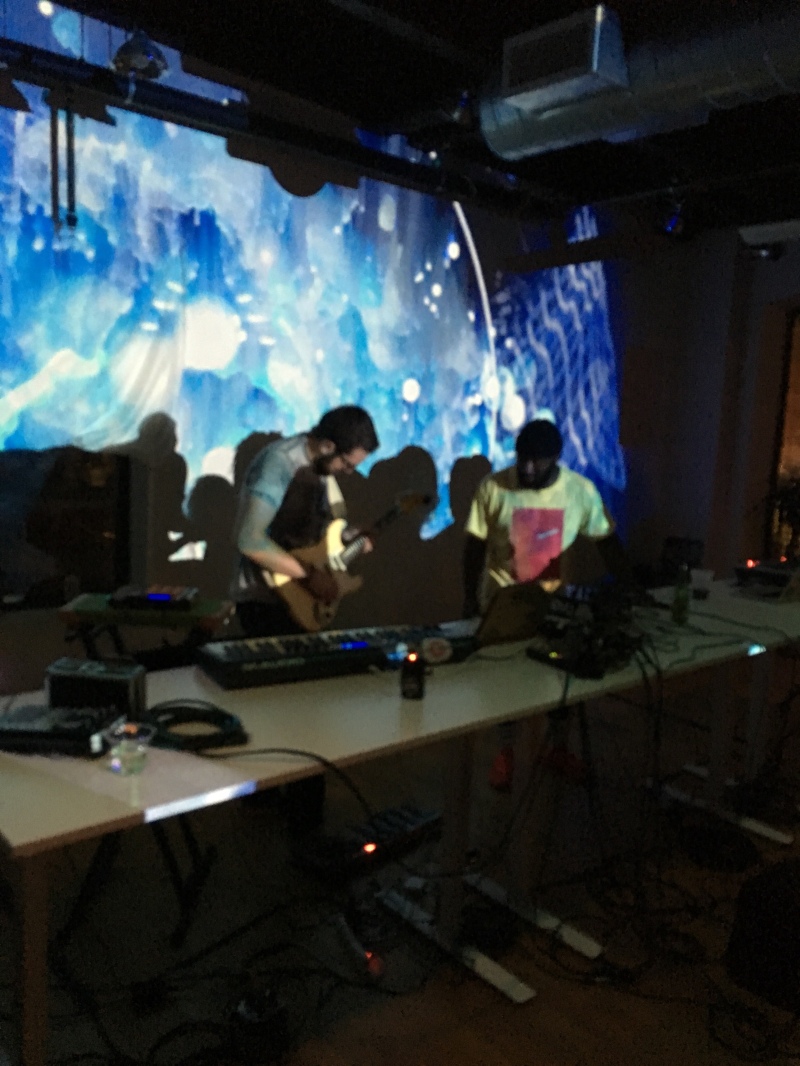 Jenova 7 was the wildcard for me for the evening. I knew he was a student and scholar of music and HipHop. I was not expecting such an overall talented musician. I knew he made beats, and messed around with the guitar, but his set was a true showcase of his musical abilities, not limited to only HipHop. He and I chopped it up for quite a bit before and after his set as we discussed beats, guitars, documentary films and more. He is an engaging dude with a lot to say. A willingly-open conversationalist, we even talked some bigger ideas and plans with the current renaissance of HipHop and specifically the unparalleled burgeoning scene in Boston. His beat set was just the appetizer. He got the beat going and went into full improvisational wonder as he played a feverish guitar. DJ Manipulator even jumped on some of the beats for some dope scratching. When they connected, it was genuinely an inspirational moment in music.

Hailing from Poughkeepsie, NY and repping the Mutant Academy collective, Ewonee has been killing beats for a minute now. He has developed a strong following with his high level of technical skill without sacrificing the heart that his beats carry. His samples are so soulful and create such a euphoric feeling, you can’t help but feel good. He’s got a few ominous, murky tracks in his repertoire, but the soulful, upbeat ones just have a tendency to grab the listener. Heads usually end up dancing to the frequently funky beats. Ewonee has crafted his signature “Mutant Shit” sound that also doesn’t fall into boom bap, but employs additional sonic elements to create a fully immersive experience. Just last month, he released his vibrant LP titled ’73.

I hadn’t heard of Rayel prior to this Nightworks episode. I asked a homie mid- show and he informed me that Rayel was an emcee. When her set started, I heard her sing and I thought she had a talented voice. She sang through a couple of joints and I thought that was the extent of her talents. Was that an underestimation of her abilities! Rayel then burst into some dope raps, surprising the audience, myself included. She amazed all with her sharp delivery and quick rhyme patterns. As Rah Zen so eloquently put it, Rayel “captivated” the audience with her “incredible performance.” During her performance the whole crowd was feeling her strong raps and powerful vocals. Watch out for Rayel, she is a talented vocalist and lyricist emerging on the scene. I know I’ll be checking for her next release.

The homie pulled up, blew some gas and vibed out for the artists’ sets. Once the majority of fans left, post- show, the obligatory cypher began. That’s when Divino decided to grab the mic and appropriately melt that shit.

Another night of fantastic performances for the books. Artists showing and proving for the real heads. Nightworks never lets HipHop fans down.