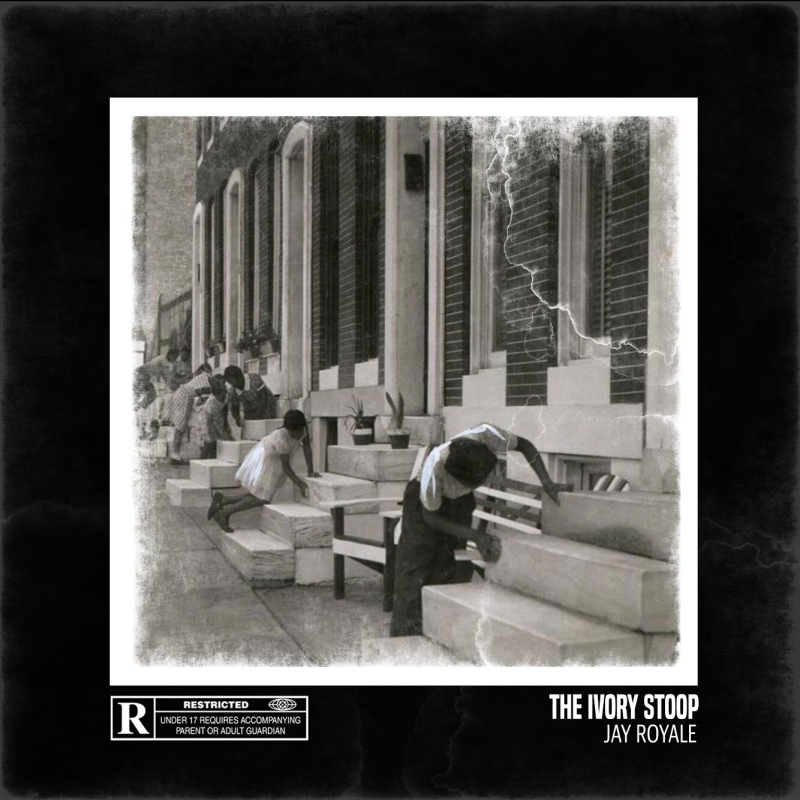 Jay Royale pulls the DeLorean out of the garage for this retro-sonic journey of razor-edged rhymes and thumping beats. Heavily inspired by the early-mid 90’s street rap in New York, Jay Royale pays appropriate homage with this project. The east Baltimore emcee delivers his debut LP, The Ivory Stoop, full of crafty lyrics over purely minimalist production.

Jay Royale has popped up on a few projects and collabs with some of the finest emcees in the underground including his own single “Dinner Plates” featuring Milano Constantine which dropped a few weeks back.

For his debut album, Royale selected strictly stripped-down beats with dusty, minimal loops. The beats maintain the feel of the peak-era sound from the early/mid 90’s originating from NYC.

DRHH: I hear the heavy 2nd golden era influence in your sound and beat selections

JR: I love the “golden era” sound; the lyricism, wordplay, metaphors and all! A lot of people think I’m from New York just because of how I rhyme… For this project, my debut LP, I wanted to keep it as Baltimore as I could… I have projects floating around on SoundCloud, Spinrilla, Bandcamp & Datpiff; they aren’t professionally mixed and mastered but the bars are dope.

“The intro” prod by Beppo. Jay Royale sets the stage with some quick bars welcoming cats to The Ivory Stoop.

Jay Royale looks at this project as not just a sequence of dope tracks, but as a narrative journey. This idea encourages significant replays, to value the album as more than just a passive experience.

JR: “This album isnt just a series of songs. Aside from the symbolism of the title, The Ivory Stoop is a story of a have-not boy who matures into a man. He’s a gifted and talented kid, who wants to go to school, but he sees the flash and the money and is enticed by that.” 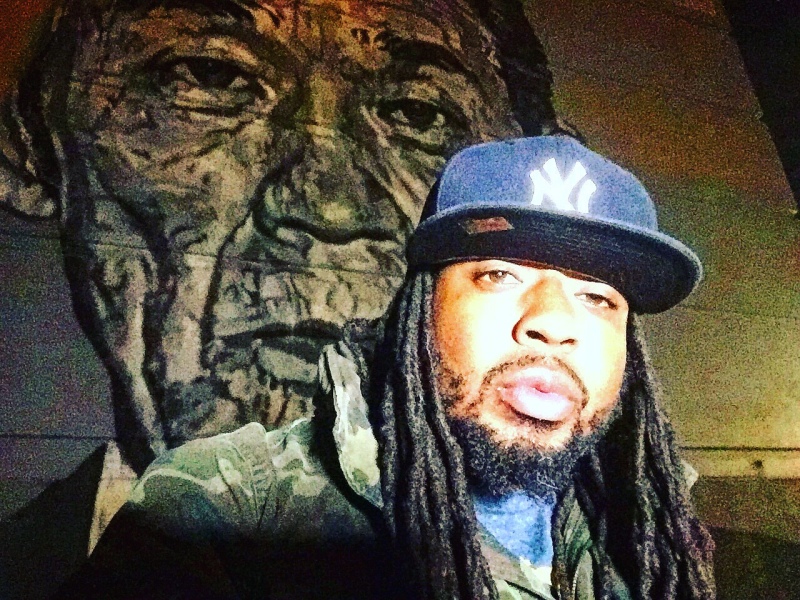 DRHH: What’s the idea/concept behind the title The Ivory Stoop?

JR: In Baltimore, in the early days in HipHop, the value of the Stoop meant something. It was a place of positive activity. Even before hip hop, in the city, with all the brick row houses, people would take pride in the presentation of their Stoop. The front steps or Stoop were made of marble and people would carefully wash the Stoop like once a week. I made a parallel of that idea to the progression of HipHop. Early on, it was clean, there was a message. Then down the line it became the hustle spot. And then it became the trap. It went from being cleaned once a week to this dirty, run-down, ‘I don’t give a fuck about it’ type of feel. It’s like they don’t care anymore. So I felt there was a parallel symbolism between the care and presentation of the Stoop with the quality and content of HipHop.”

This visual aesthetic of those same stoops are evident on the front cover of The Ivory Stoop where people are seen washing the marble steps. This is in stark contrast to the back of the album where the facade and the steps are boarded-up, dilapidated and run-down; not taken care of. 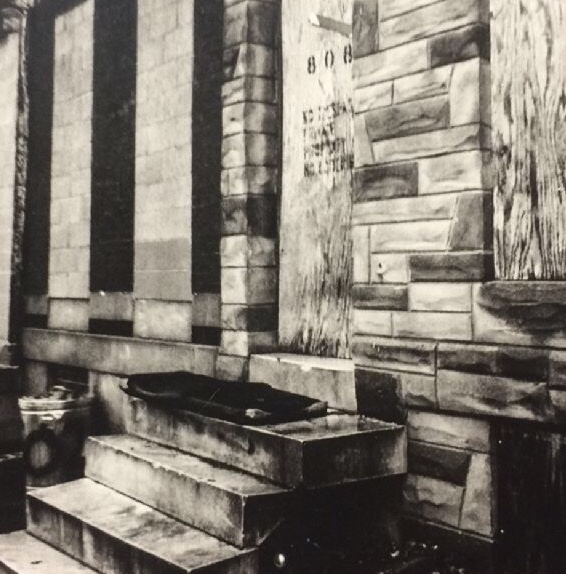 The slightly jazzy vibe and strong drums on “Halfmoon Caesars” prod by Mute Won carry the listeners into yesterday. The sharp cuts of Ghostface’s peak-era voice by DJ Grazzhopper give the track a street edge and throwback feel.

“The Ode (to the bubblegum sole)” feat Bossman Da God prod by Illmeasured is a doo wop nostalgic vibe as the young man in the story lives a simpler existence yet begins to see all the trappings of the material goods as appealing and alluring.

“As a youth on the Stoop

It was perpendicular to the drug distributors

Young and oblivious to life and the strife ahead of us

“The Aspiration” feat Lonnie Moore prod by August Flight Gordon. The strings and subtle effects coupled with resonating dusty drums create a euphoric and throwback feel to the track. Here Jay talks of his potential as an intelligent youth yet he yearns to become something different. Lonnie Moore drops his fiery booming lyrics alongside Jay Royale’s reminiscing and vivid imagery.

“Vintage Garments” prod by JSoul with cuts by DJ Grazzhopper. With its repetitive piano and drums simply laid down, the track plays out like a vintage Mobb Deep or preemo beat. The cuts by Grazzhopper featuring quotables from Nas just solidifies the extensive tributes to that era. This is a standout track on an album of hard-hitting beats and no nonsense rhymes. Jay describes the track in the stage of the story where the main character “starts looking fly as shit.”

“The Transaction” prod by Ray Sosa. This is where the narrative takes the main character deep into the life he is now intrinsically tied to. The track sports a repetitive piano loop and punchy drums. Jay Describes the reality of that lifestyle, resigned to constantly watching ya back and ducking the cops.

Got the pack and my crew got paid.

“Armeteo” feat Ill Conscious prod by Ray Sosa cuts by DJ Grazzhopper. The strings and horns accompany the Spanish vocal sample for an experience like an old film. Just like several other tracks on Ivory Stoop, the scratch hooks are again executed to perfection here.

Check the track out here:

“The Iron” feat Benny The Butcher prod by Ray Sosa, cuts by DJ Grazzhopper. This joint is another standout banger, with Benny supplying his usual perfected rhyme scheme and seamless flow to match any beat. Both emcees bring their serious bars over tension-laden strings and plinking piano loops.

A slug will chill up in ya lung,

Milli pop on you Milinokases.

“Malcolm Little” prod by Mika Dough cuts by DJ TMB the narrative continues as the now grown man fears for his life and existence similar to the likes of Malcolm Little (X). The track features layered guitar loops and booming bass with snappy drums.

DRHH: You definitely brought the heavyweight features for the album with Benny and Conway. How did that come about?

JR: “We were big fans of the Griselda camp since they hit the scene and when they came to Bmore we just showed love man and the rest is history.” 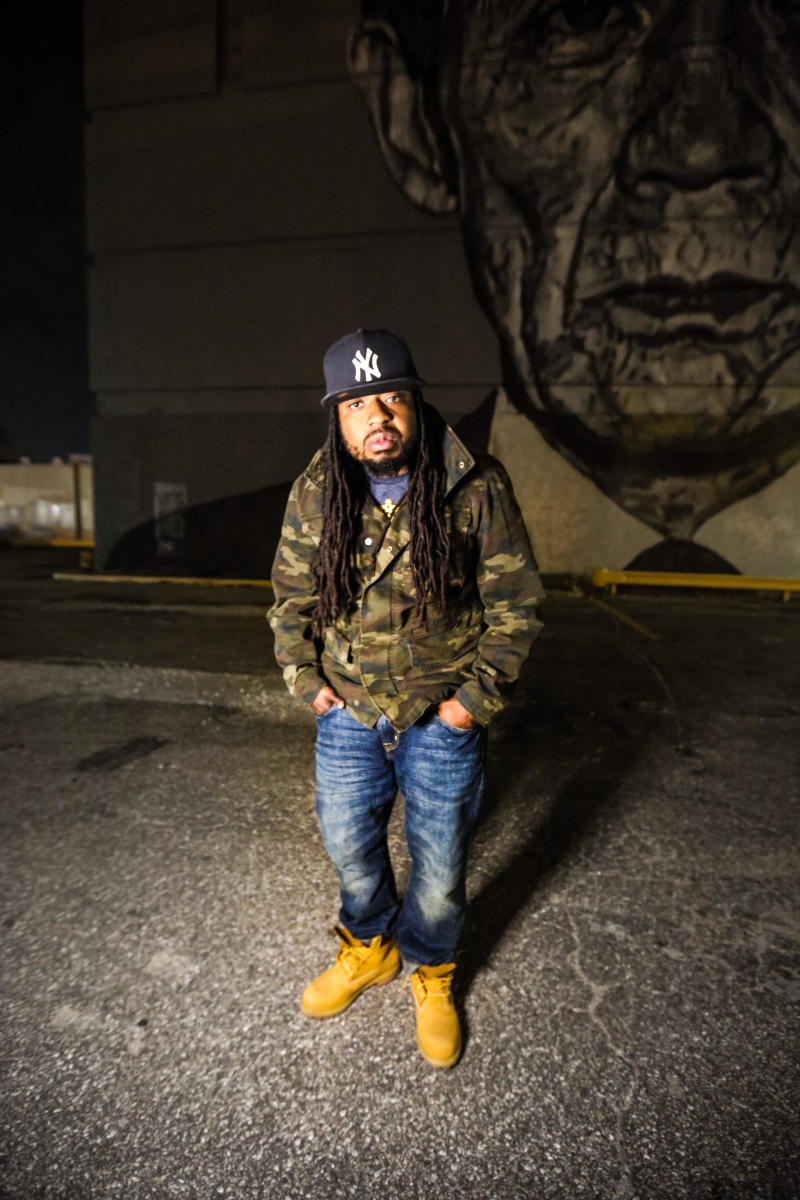 DRHH: Obviously you brought on some local talent too, featuring Ill Conscious on a few joints.

JR: “As far as my Baltimore family goes, niggaz is beasts on the mic! I knew who I needed to hit up to make shit a fire project.”

“Walk Wit A Gun” feat Conway the machine and Ill Conscious prod by Ray Sosa. Royale tells us here how the main character is “entrenched in the lifestyle where he has no choice but to carry the heat.” The beat bangs and sounds like it could’ve been a Biggie joint, circa 95. Conway comes with his usual braggadocio and seems to be enjoying himself as he breaks down all the wack emcees to crumbs. Jay goes toe to toe with some ill rhymes himself:

“Could slide a rook and put ya king in check,

Told ya checker from the jump but you was thinking chess

Everybody say they built for Cubans till the links connect.”

“The Arithmetic” prod by Ray Sosa is a somber solo jazz trumpet/coronet joint over pianos and drums. Here Jay Royale breaks down the pragmatics of the life and hustle that the main character now embodies.

Jay Royale reps Baltimore well on this album but wants to expand his reach with his music and his messages.

JR: I love Baltimore but I want to continue to reach out across the world and appeal to all types of people with different backgrounds.

Jay Royale delivers an excellent and impressive debut LP, worthy of a veteran in the game. He crafts songs with meaning and creates a binding story throughout the album. He weaves the tales of the streets into his clever lyrics across thumping beats with minimal production. Keep watch for Jay Royale as he makes his mark for Baltimore and in all of hip hop.