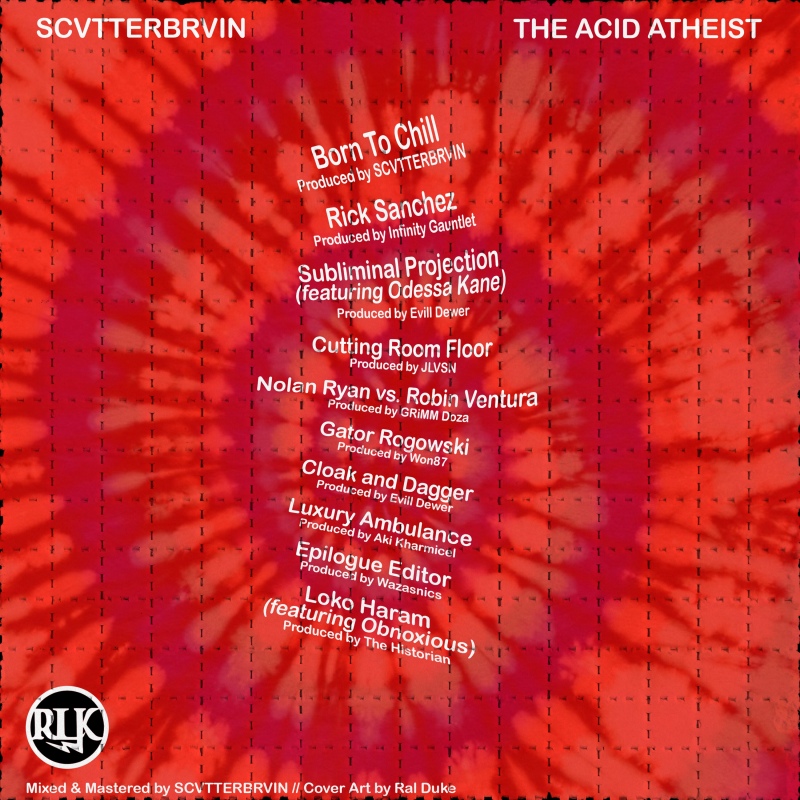 Scvtterbrvin focuses his visceral rhymes across a range of surreal, nervous and mind-warping soundscapes from some of the underground’s most active producers with his latest project, the 10 track The Acid Atheist. Currently residing on the East Coast, the San Diego-bred, former battle rapper stretches his syllables, using a delayed cadence. The project upholds much of the trippy aesthetics with dusty psychedelic samples and tense/anxious moods throughout. Scvtterbrvin’s content often pushes the shock value envelope but he does so without forcing it. On Acid Atheist, Scvtterbrvin often comes across as almost comically brooding, yet he seems to maintain a level of humility, staying grounded and avoiding boastful lines.

DRHH caught up with Scvtterbrvin to find out about his battling background and how the new album came together.

SCVTTERBRVIN: “I originally started battling just to put in work and pay my dues. I didn’t want to be one of them producers that just starts rapping out of nowhere and drops an album. I wanted to be on the frontline and draw blood. I got into a lot of random battles around Southern California. I Eventually ended up battling on GrindTime, the Red Bull EmSee competition and King of The Dot.”

DRHH: How is your approach to rhyming on an album different than battling?

SCVTTERBRVIN: “In rap battles I’m targeting one person and trying to show everybody I’m the better rapper. It’s a lot more ego tripping. When it comes to recording I try to still have the same energy but channel it to fighting a greater evil. It becomes more about destroying the status quo than another rapper.”

On the opener, “Born To Chill” Scvtter delivers measured rhymes over a daring strings and horns sample that echoes.  On “Rick Sanchez,” he spits over jazzy piano and flute loops courtesy of Infinity Gauntlet. On “Subliminal projection” feat Odessa Kane producer Evilldewer provides a juxtaposing beat that’s hopeful and light but still provides an edge as both emcees bring fiery verses.

DRHH: What was different for you about putting this project together?

SCVTTERBRVIN: “Going into this project I needed to drop a higher dosage of music for the people. I usually just put out EPs with 1 producer. This one is 10 songs with all different producers from different places. I wanted to mesh my style with producers I never worked with before. I feel like if you’ve never heard of me this is the perfect album to start with to see if you want to plug in to the RLK (Red Lotus Klan) matrix... When I first started trying to rap I was able to freestyle alright but I couldn’t understand how to write rhymes in a 16 bar format. One night I was on acid watching a Rakim interview. He was describing how he wrote his raps and after that I was locked in. I seen exactly what he was talking about and everything connected for me. Shoutout to the God, Rakim Allah.“

DRHH: How’d the title come about?

SCVTTERBRVIN: “Originally my rap name was “Scatter Brain The Acid Atheist”. I stopped using it after a while because promoters were scared to put my full name on the flyer. I decided to name this new album The Acid Atheist to remind people I’m still here. The rap game is full of nothing but cocaine and alcohol so I decided to bring LSD to the party.”

On the “Cutting Room Floor” producer JLVSN creates a jarring, anxiety-inducing beat, as if someone was laying on the horn in the car behind you. Producer Grimm Doza puts down some compressed drums with short chopped flutes on “Nolan Ryan vs Robin Ventura” as Scvtterbrvin snarls his way over the beat with creative metaphors and some clever wordplay. Check out “Gator Rogowski” produced by Won87 here:

Evilldewer provides a more cosmic beat on “Cloak and Dagger.” A standout joint, with the ghostly strings loops, “Luxury Ambulance;” Producer Ali Kharmicel conjures up film noir score bits with visions of Scvtterbrvin peering over his ouija board, as he respectfully borrows an infamous Guru line from “Soliloquy of Chaos” for the hook. Another standout track that fits in with the uncertain mood of the entire project,”Epilogue Editor;” Producer Wazasnics creates some tension with rising strings over crunchy drums, as Scvtterbrvin carefully places his metered bars. Check out “Loko Haram” feat Obnoxious produced by The Historian here:

On The Acid Atheist, Scvtterbrvin provides the hazy trails with plenty of moody avant garde beats to fuel the creative imagery and clever wordplay. Scvtterbrvin definitely delivers to the niche underground heads looking for sample-based beats and darker, psychedelic vibes.